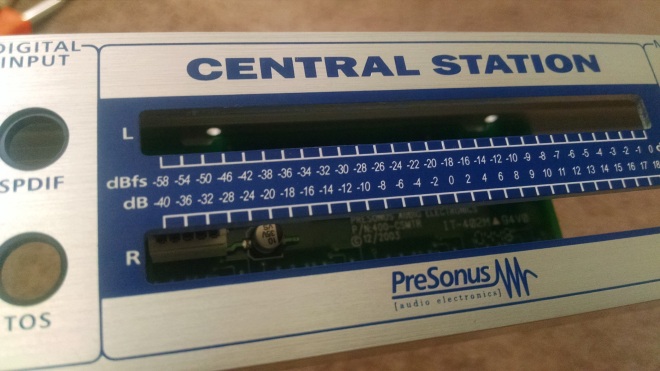 I ordered a PreSonus Central-station stereo input/output selector for my main office (where I do most of my editing/mixing away from “the studio”)
It’s nice to be able to switch between various inputs (computer, synth, etc) and varoius outputs to check sounds,  including 3 speakers (Equators, crappy Logitechs) and 2 separate headphone outs.

I found a great deal on a used one on eBay:

Bought the unit, and as soon as it showed up, I knew there was trouble.

The box was oversized, and I could FEEL the unit sliding around in ample empty space inside. Opening the box revealed just how little care was taken to pack and pad this unit for shipping.

Taking the unit out of the box, all the surface-mount hardware (pots, buttons jacks) seemed ok, except the central VU-meters. Their plastic lenses were rattling around inside.

Plugged the unit in, and it seemed to pass and handle signal just fine. Literally the only problem was the fall-out of the

After emailing the seller, we agreed to a partial refund of the value it would cost to repair. Since I planned to attempt to repair it myself, I did the honest thing and got an inspection and repair-estimate from a colleague. After the partial-refund was filed, honored, and positive feedback exchanged, it’s…

As a seller, please make sure to package all audio equipment with ample padding, and no wiggle room.

As an buyer, many times when audio gear “breaks” in transit, it breaks at an (obvious) weak spot, that may be easier (and more satisfying) to repair yourself than to go through hassle of returning and re-purchasing. The more “surgery” I do on gear, the more I realizes how much stuff is (mostly) well-built on the (cheap) circuit board (where it counts), with often superficial and low-tech weaknesses in the housing (where it’s easiest to reduce manufacturing costs).