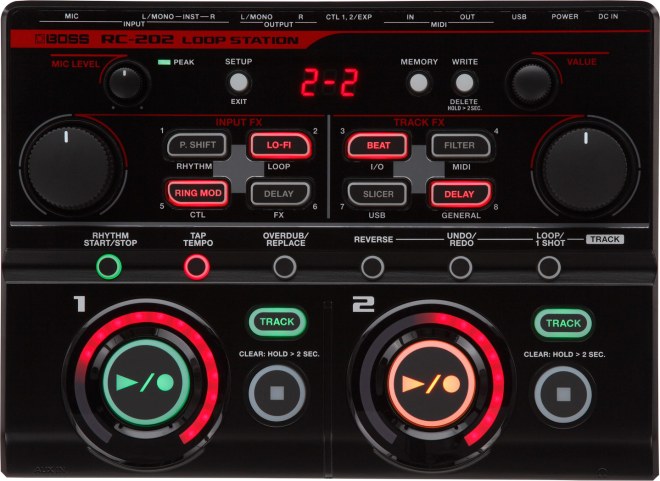 The following is derived from various posts I made over at Electronauts forum.

I bought the RC-202 this week, and here are my impressions from the first week of poking around. Seeking a complement to the deep-and-complex Octatrack, I sold my Pigtronix Infinity (which I was using with my hands, tabletop) to purchase/explore this 202 for quick-and-dirty loop/one-shot work, without ALWAYS having to plan ahead, set up machines, and and menu-dive with the OT’s “looper-ing” with Pickup- or Flex-machine tracks.

Specifically, I was interested in loops whose length was defined directly (press record, press play), without having to do any prep-work around at UI or step-sequencer. Here are some of my key first impressions of the RC202, in and outside of that particular interest.

While the Boss RC202 may seem like a pared-down version of their RC505 (which came out) , the RC202’s arrival came after an update to the RC505 V2.0 firmware, but it is not simply a 505 with only 2 tracks; the 202’s feature-set and User Interface fall ahead or behind of the (v 2.0) 505 in various ways.
Let’s look at hardware and software features in detail, with an interest in the growth-potential of this looper as an investment.

RC tabletop loopers can sync with other gear, either as Master (create a loop, RC calculates and sends Clock to your drum machine), or as Slave (RC manages some time-stretching of loops to follow Clock from other Masters). Understandably, the 202 fared better as master, as the 202’s Phrase Sync time-stretching got grainy and would would lose the down-beat/bar-line when making significant tempo changes.

The 202 unit will always Quantize your loops to/for tempo sync different ways, depending on how it’s set up.

Most users making straight-forward 4/4 music will be readily satisfied, if not impressed with the 202’s usage, but  I tend to explore more ambient and poly-rhythmic territory. My in interest in any looper, drum machine, arpeggiator, or other groove gear includes if and how it can play across the bar line, such as in odd meters. One of my favorite things about the Gibson EDP was the option to sync loop operations (and thus loop-lengths) down to the MIDI beat, or 8th note, or finer, allowing for quick creation of loops of, say 5 8th-notes that would roll across the bar like so many trance arpeggios.

Comparing their user manuals, while 202 has only the bank-wise option to Quantize loop operations to internal- or external beats…the 505 has discrete per-Track options for loop Measures (including “Auto” and “Free”) and Loop Sync (if other tracks re-start to sync w/ first-recorded or by their own length), as well as the Bank-wise Quantize, and the additional LoopSyncLength (in # of Bars or “Auto”). Obviously, the 505 offers deeper, if more potentially-frustrating options for synchrony of loops between each other and/or other devices.

Beyond this set of the 202’s options (or lack thereof) being more restrictive than the 505 et al, there are a few desirable settings/combinations that are not available within the 202’s own configurable settings, specifically, the Quantization and Rhythm Guide. This is my biggest frustration so far, because of my specific interest in recording loops of arbitrary beat-lengths (such as 7 quarter-notes, or perhaps 5 eighth-notes, etc) determined directly by the timing of punching IN/OUT a new recording, with recording (and related operations) quantized to the Beat…

Quantization and the Clock (at present) interact thusly:

For me, the limits of the above 2 points could be solved if they simply expanded the Quantize options to include the time-signatures of 1/4, 1/8, and 1/16 time. This way, I wouldn’t have to wait for the (Guide’s) Bar to finish, as my Bar and Beat are the same period of time.

Quantize settings are stored on the System (global) level, where the Rhythm (and thus Bar/Meter) settings are stored at the Bank (of 8 phrases) level. There are some handy features to require a (1 Bar) count-in before recording and/or playback, stored on a per-bank level, so you can start different “songs” differently.

Thankfully, the 202 allows you to configure the headphones mix differently from the Main outs, so you can isolate the Rhythm Guide to the headphones only. You can also put the Input sound in headphones only, so it does not pass thru to outputs, which is the dry kill necessary when I use it in an aux loop.

Unfortunately, the RC-202 does not have full and direct MIDI control of all operations (such as “one midi message per button). Instead, under the CTRL menu, it (frustratingly) continues the RC series’ design of allowing you a few  CC’s (80-84), which you can assign to (here about 2 dozen) messages,

By contrast, the 505 (v2) allows up to 16 (!) External controls to be mapped per Bank, with additional settings if the switch/message is “latching” or “momentary.” Thus, with clever programming, the 505 could accomplish more complex looper “macro” behavior beyond its initial feature set. For instance, the 505 could one MIDI message to momentarily switch into switch the track into “OverDub,” switch OverDubMode into “Replace” mode, AND engage Track FX (such as Beat Repeat) creating a “momentary stutter-replace” macro-behavior previously only possible on holy-grail loopers like the Gibson EchoPlex using Loop 4. …makes me yearn to upgrade from 202 to 505 already.

Consulting the  Parameter Guides for both 202 and 505, I was disappointed to find no mapping option for remote-control of Reverse, PlayMode (Loop, OneShot), half/doubles-speed, or LoopMultiply… commands which are arguably more common or useful among performance loopers.

Lastly, As of this posting, there were only two other snags that frustrated me (beyond Loop Size / Quantize and MIDI ConTRoL rants above).

Overall, the RC202 shows some interesting advancements toward a more quick interface and expressive processing. I REALLY hope Roland address all of the above settings and freedom-of-loop-timing issues with a follow up software update.
This is a LOT of power in a small package with a (superficially) great interface, and I hope Boss embraces and nurtures this series with (more) firmware updates bring growth instead of obsolescence.