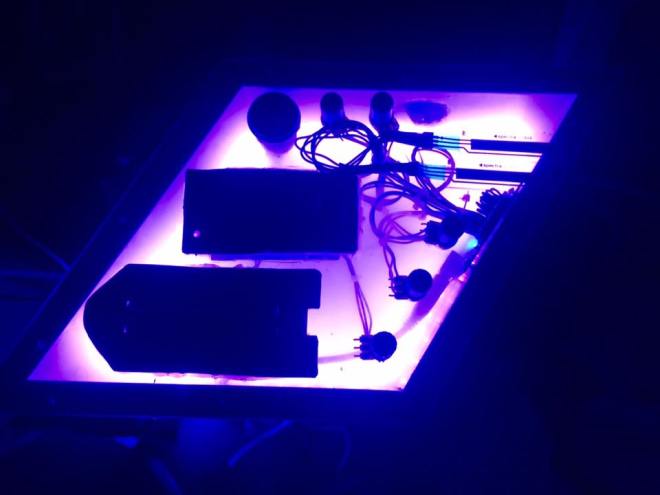 Given my background/graduate work “music interfacing,”, I was very excited to get to focus on this with an undergrad.

Version 1, on the Livid:

Callum McQueen  (AiPh c/o 2016) designed and built his ‘Rhomidus’ MIDI hardware contorller for his Senior Project (read more at the link). This involved using the a Livid circuit board/brain and connecting the desired buttons/knobs to the boards electrical terminals, then using the USB editor software to assign MIDI controllers/messages.

the “arpeggiaTorture” on the Arduino

Before graduating Callum approached me to explore how such a project may be different on the Arduino plaform, which not only includes a MIDI Library, but can run C and C++ (among other) object-oriented languages.

Duding this senior project, we explored some basic concepts of data-based memory interpretation, creating independent clocks and timers, and some time-based automation to program a simple (but unique) arpeggiator algorithm, and the corresponding hardware controller, which we dubbed “the arpeggiaTorture”

Unfortunately, time in his senior year proved to short to fully incorporate these programmatic tools (yet), but we may continue collaborating on this in his post-college designs.

In my continued contact with Callum, I’ve seen some new developments on a new controller. I see Guitar-Hero-style finger paddles and touch-strips !

…and posted a YouTube video on extracting the strum-bar from a Guitar-Hero controller:

Looking forward to seeing more of this both on the bench and on the stage !